Wasn’t it said that only ‘Mad dogs and English men go out in the midday sun’? Well must be still be true for mad dogs, but the English are not the same as they once were it would seem.

If you read the British news there seems to have been a ‘heat wave’ here, has there? Where? I have noticed some nicer weather, even hotter weather than normal British June and early July, but ‘Heat Wave’ you have got to be kidding me.
Last week London’s temperature reached a pleasant 33degrees Celsius, this is not ‘Blistering’, or ‘Scorching’ as the newspapers and BBC website reported it, but warm.

Just a note at this point – do you know Britain is the only nation to use Fahrenheit when the temperature is hot and celsius when it is cold – ‘It’s reaching 100F’ The newspaper will report, but should it get cold you’ll read ’11C in July’

The BBC and Sky’s news sites have warned the public not to go out for fear of death by extreme heat! What the… ‘Extreme heat’? It’s a cloudy, windy, dull 24C.
Radio Four is informing the public to wear a sun hat and cover oneself in sun block for fear that there will be a repeat of last weeks 5,000 reported cases of sunstroke.
5,000!
In Paris last week  it was 42C Can you imagine the Brits in Paris? they would have all melted I bet!
So am I the exception? Well more accurately are my family the exception? My dad loves the sun, he is currently in Turkey where it is approaching 50C and he is loving it. He is also the only person I’ve ever known to get a sun tan on the soles of his feet! I remember my sister rubbing cooking oil on her stomach to sun bath in our garden.
I do not think it has ever been hot enough in the UK for me to moan about it being ‘too hot’.
Yet The Telegraph’s website today reports:
Hottest British weather could bring highest temperature EVER!

Really? I don’t think so.

And do you know the British Railways are made of jelly? Or some derivative of the stuff, because The Independent reports that:
The Heatwave causes buckling to the tracks of British Railways.
What do we do? Make everything out of the most inferior materials so that we have reasons not to get to work?
In the winter we ”The wrong kind of snow’.
We get ‘Leaves on the lines’ that stop train running on those jelly tracks in the Autumn and who knows what happens in Spring, probably ‘Bunnies cause allergic reactions to train drivers’.
As for the ‘Correct Attire’ required during these ‘Hot Spells’.
I live in trousers and a shirt, maybe a T-Shirt, very rarely do I wear shorts and never, never do I venture outside topless.
But exit your front door today and you will find countless men walking about in shorts, a T-shirt jammed in their waistband and nothing covering their flabby, unappealing torsos and walking the streets, not even in the parks, just going to the shop, why is this acceptable? And shouldn’t we in this age of feminism and equal rights be ok with women doing it?
Well I just think everyone should be made to wear a top in all weathers in a city. On a beach well that is different and that is a different post altogether!
We both have a problem with the ‘Shirtless brigade’ at the local climbing walls, even in the midst of winter half the guys have to be topless to help them climb better, but in this heat, most turn up without a top to start with and climb all day like it.
As for the need to wear white sport socks with sandals, anyone wearing socks and sandals should be shot on the spot. Why oh why? It’s the male equivalent to girl’s in Uggs! (but another post for another time!)
The park near me will be packed today with sun worshipers, laying on their beach towels sucking up as much sun as they can, even though it is cloudy and windy. Again I do not get it, why? It’s not hot enough for that. Even in last weeks 33C it’s not an excuse to lounge around in a public park in a Budgie Smuggler, for those that do bathe the moment the sun is out are hardly ever in the prime fitness of toned gods and goddesses.

SHE is not from this warm isle and her native Australians are just taking the piss out of our news reports, it is their winter at the moment and it is still 3 degrees warmer than it is here today.
In two weeks the ‘Heatwave’ will be over and the cold, wet weather, typical of a British summer will return and then, well you know what will be the headlines.
‘Rain, rain, rain, bring back the sun’.

Then we get the rest of the year moaning about how cold it is.
I have been thinking of writing this post and then thinking, ‘no you’re just being silly’. But with the reports that the ambulance service received over 535,000 calls due to heat stroke last year’ alone I just had to write this and make it clear.
I have a mad dog’ and though I do not claim much patriotism to being English (in fact a Londoner is as far as my loyalty ever really goes), I still think we were the ones taking tea in the middle of the Indian summer, dressed in a three-piece suit, or a woollen military Red Coat!
Were we just a tougher race a hundred years ago? Or are the British (notice I didn’t say we!) just a bunch of whiney ice pops too fragile for the extremes of our their own climate? 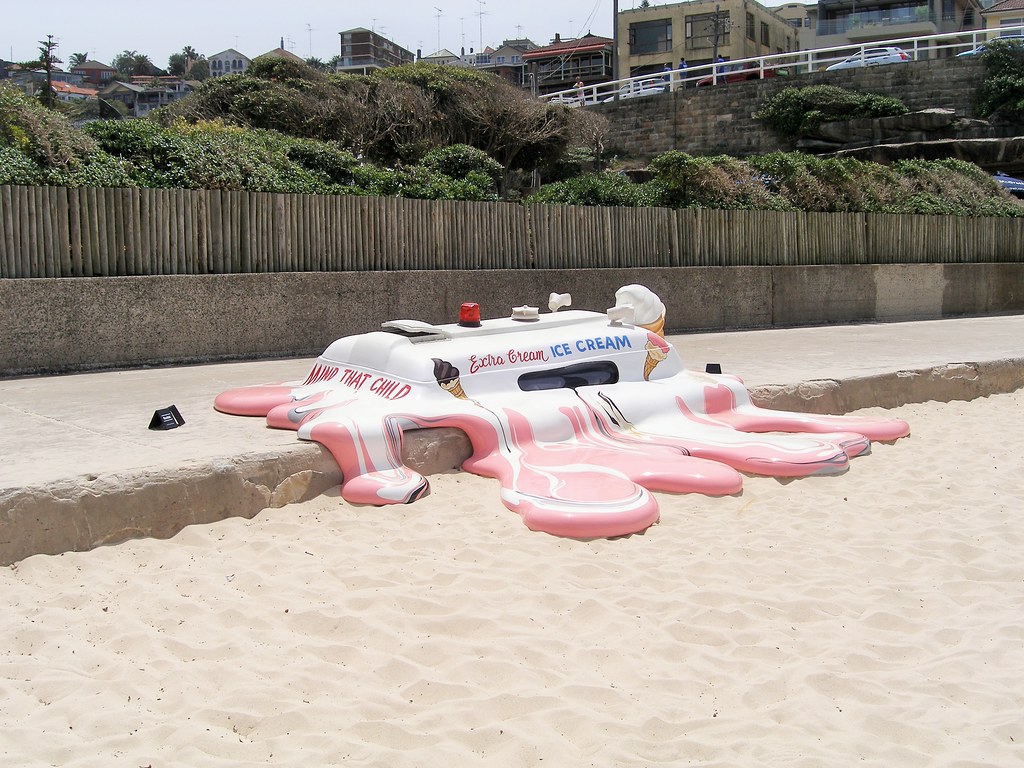 Well I think I just want to go somewhere where it is 40Degrees Celsius every day, that’ll do me!