The other week I talked about my attempts to re-learn to draw, having spent years making mistakes and with my foray into the Digital Art world. One of the key aspects of this new medium was the discovery of the Australian YouTuber Josiah Brooks and his channel Draw With Jazza. This guy and his channels have changed me so much I couldn’t put it all into the first post (mostly because Bob said I was ‘warbling on about my boyfriend too much!’) So instead here is a post all about him… 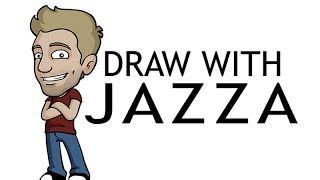 I first discovered ‘Jazza’ about a year ago, when I started trying to draw using a new digital tablet. I found it hard to draw on a surface but look at a screen ahead of me and I couldn’t afford the graphics tablet versions, I searched and searched for helpful tips and advice. But most tutorials skip the fundamentals of digital art and just assume you know what a ‘Clipping Mask’ is, how to set the pressure sensitivity of your pen tablet and little things like that.

Then I discovered Draw with Jazza. This twenty something Aussie has been making Youtube content for over five years, (longer if you include his music vids and other bits), but in his older videos he did simple ‘Character Design Sessions’ in which he showed each and every stage, from creating a new page and setting up the pen, to sketching ideas and then adding layers to draw over the sketch, gradually refining the image, adding masks and gradients. This was a source of inspiration to me and I finally understood what the other youtube Artists weren’t explaining. I started to watch the back catalogue of Draw With Jazza and without realising it, I became addicted, much to Bob’s boredom. According to her every conversation had the word ‘Jazza’ in it! And I knew a lot about him.

Jazza’s twice weekly videos run the gauntlet of creative ideas, he does traditional art as mentioned, digital creations too, but he has even made art using a drone, painted canvases while upside down, he is really into exploring Virtual Reality at the moment, but he has also used 3D pens (in his most watched video), to create a epic figure fighting a dragon. The list of creative ideas he has is seemingly endless.

The Australian YouTube presenter and artist grew up In and around Melbourne a troubled, creative, youngster, from a strict Mormon family, he wrote songs and played them, on drums, piano and singing, all along with making films and drawing. He became a loner, regressing into his art and slipped down the depression slide, becoming Bulimic in an attempt to solve the weight issues and self-esteem issues. Eventually a few years ago it all came out and he started to recover, one issue it seems was the religion he had known all his life, he basically didn’t believe in it. After a big disagreement with his family he seems to have left and gone on tour with  The Warragul Production Company and while touring he met and fell in love with Kate the Choreographer/Lead Actress for the company. All this time he was already making Youtube content, but none of his personal life was included in the design videos.

Now Josiah and Kate have a three year old nicknamed MJ (Mini Jazza – to keep his name a secret) and together they run a every growing You Tube Channel, currently ticking over at 2.5million subscribers.

But he remains humble and vulnerable, With Daily Jazza the daily Vlogging Channel that runs alongside the main channel we now see more of the personal life of the Brooks’ household and the struggles he still fights with to remain so ‘up’ every day.

When I first found Draw with Jazza they had just launched a fundraiser to help re-build his garden shed to allow him to have a larger studio to create more amazing art in. The target was Aus$25,000 and in just a few days raised Aus$100,000, watching the videos on Daily Jazza, showed him and Mrs Jazza (wife Kate) balling their eyes out in happiness.

Because of his design sessions and in order to follow along with the tutorials, I even threw out old pens, bought mechanical pencils and Alcohol based Copic Markers and I started watching his 3 times weekly videos and I started to draw on a daily basis. Trying to learn to forget. Stopping myself from repeating the same mistakes every time I started a fresh picture. I drew characters and creations for months, I tried and tried to break the old habits but it just wasn’t happening. The heads were always too big, the faces were warped, the proportions were off, seriously I was breaking the old habits, but in favour of loosing the ability to draw at all.

So back to Mr. Brooks I went and I visited the site Jazza Studios – a resource run by the man himself, selling digital and physical art related products. I bought a copy of the Creating Characters Book, followed each tutorial religiously and started to create more cartoon style characters. It wasn’t my goal to draw like that, but anything was better than what I was making.

Creating Characters is a great book, if only because it doesn’t read like your a complete imbecile or a child, but it does explain everything step by step in simple, effective ways. You start off with the basics, talking through styles, commitment and discovery, moving on to design, learning how to draw, create and develop, and finally how to deliver a finished product. My art became something that I was happy to show off (mostly to Bob), but it wasn’t an awful mess anymore.

To accompany the book there are also  is also  Easy Anatomy

A step by step guide to figure drawing, with easy and detail.

The anatomy book is digital and is accompanied by a Anatomy Reference Pack containing a zip folder containing 300 high res model images to use as a starting point to draw over in digital work, or as a visual reference to your pencil sketches and character development.

All this helped and continues to help my entry into the digital art world. I am still only at the edges of digital image creation and still not ready to brandish my poor attempts on here. Well maybe a couple of that I am happy with, seriously this is about the best I’ve managed drawing from scratch and I can still pick it to pieces (so please don’t do it too!)

There are e-books on drawing faces, Last Christmas he released another item to the shop, the Draw With Jazza Colouring Book  A collection of  thirty seven Jpeg and Png files for you can take one of his more popular Character Designs and re-colour the picture in your own style and colour. The two file types allow for both physical (Jpeg) and Digital (Png) rendering of the images and these are far more successful…

‘Apocalypse Ghost’, the original Line work, A Copic Marker version By Ash and a Digital Version by Bob (Clearly Bob is the better artist here!)

In addition to the books there are Photoshop pens and an Animation Foundation, a full course on creating moving animation.

There is an app ‘Arty Games’, which gives you suggestions for characters to draw, challenges and more, but so far I’ve resisted the urge to buy this too!

An in addition to all this there is even Cogent Role Playing, a alternative Dice RPG gaming system developed with his brother.

I still struggle with my art, still feel my work is under par, but (and this is a big but and I cannot lie!)  I feel better about my art and what I’m creating now then I have since I left Art School. I have recently gone through old sketch books and looked at what I drew for the last 15 years and it pales significantly to what I have been drawing in the last few months. As I say there is a long way to go before I’ll be sharing posts of my artwork, or creating my own YouTube channel on how to master the world of Digital Art. But if it ever did happen a big credit would have to go out to Josiah ‘Jazza’ Brooks.

One thought on “‘Draw with Jazza’ A Review”