Hammersmith is mostly known to us as a place that a few years back seemed swamped with clubbers dressed in their old school uniforms to attend the ‘School Disco’ Nights at the Palais, these days it’s more a meeting point and less of a destination, but there are still a number of pubs and so we thought we would do another pub crawl. Here’s our thoughts…

We know we have a limited amount of knowledge on this location but we have a vast mastery on the subject of beer!

To start off we are only concerning ourselves with the pubs around the Broadway and down to the River Thames by the bridge. With that said let’s start at the northern most edge…

The northernmost pub that we have visited in Hammersmith, we haven’t been there for a while though so it’s probably changed hands by now. From what we remember its wooden floors a green exterior not so great for beers and more a proper gastro pub, but it’s really in the wrong area so we don’t usually bother.

The only reason we are putting this in, is because it’s there. It’s more wine and cocktail bar rather than pub so we haven’t actually visited. But should you prefer a Slippery Nipple or a Zombie then maybe it’s one for you! 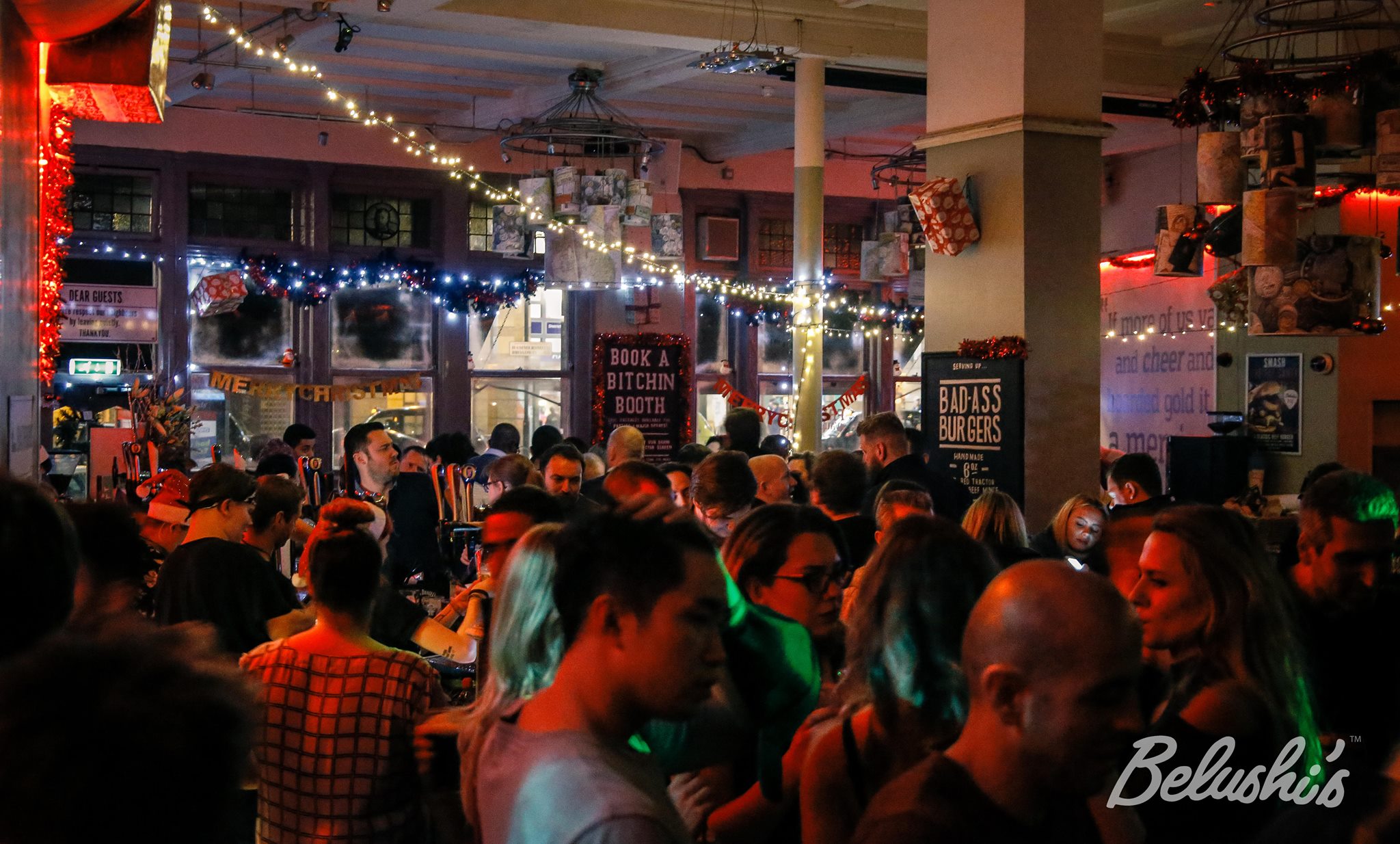 We have not been here much, one expensive round and we decided to leave as soon as possible. The beer is more of the lager variety (Fosters, Kronenburg, etc) The cocktails are extensive but we did notice that Jagerbombs are usually something like 4 for £10 in these kind of pubs, not the 4 for £16 as in Belushi’s. It is very much a sports pub with TV’s showing any football match they can,  it always looks packed though and with a Hostel above, we are sure these are main customers of the place. 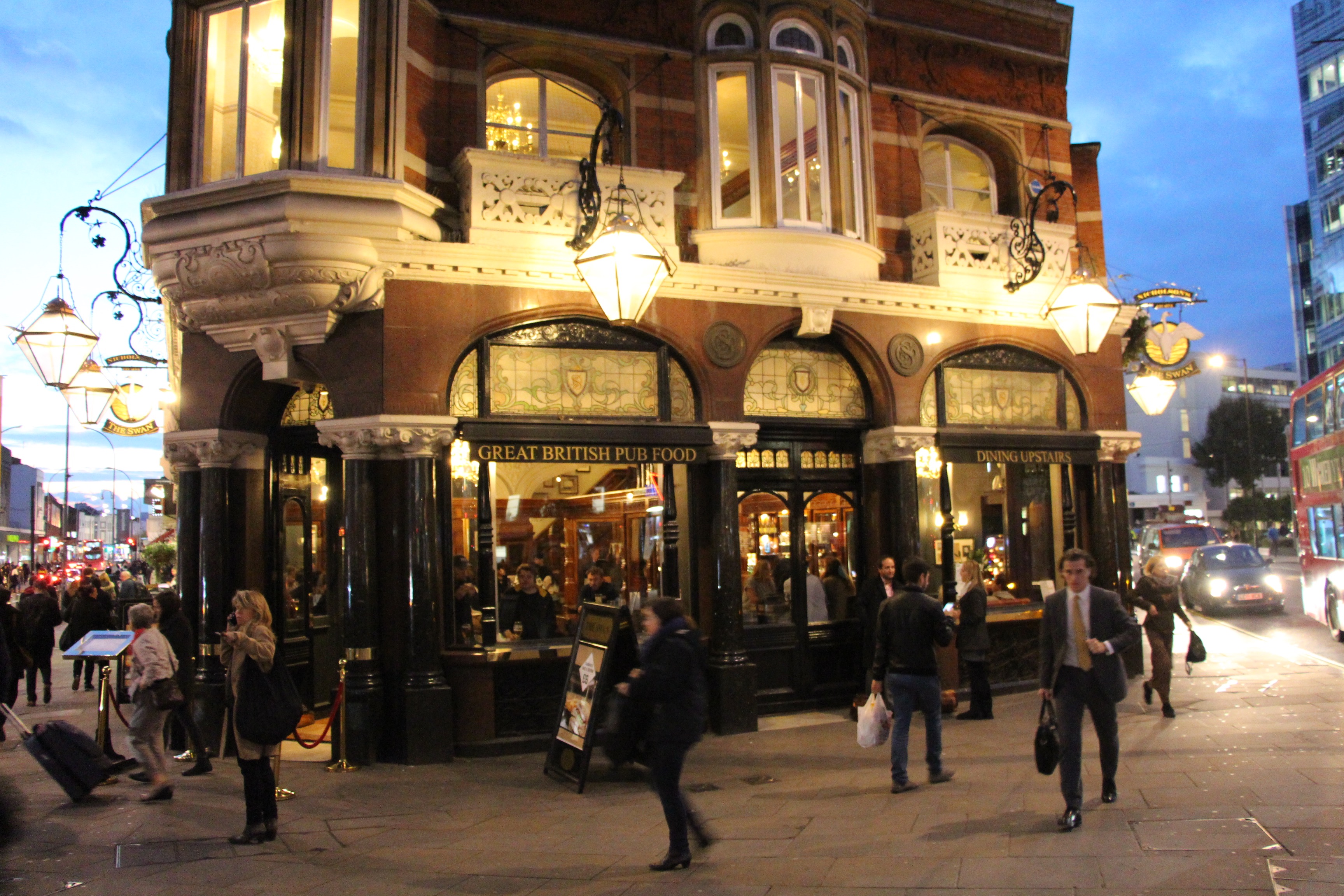 We have been here a number of times over the years, it’s big, an open seating area, both upstairs and downstairs. It is rather spacious, has extremely tall ceilings, really steep stairs going up to the bathrooms and has a pretty small bar. However they have really nice sour beer (currently), well one to be exact and damn was it delicious! This seems to be the best pub on the Broadway and is usually comfortably busy.

Much like every other Wetherspoons, this is slightly scummy with selection of IPA’s and a few other craft beers, but to Bob’s chagrin no sours and staff have no idea what they are doing or selling, but it’s cheap so you get what you pay for. Plus it stays open later than the usual 10.30. 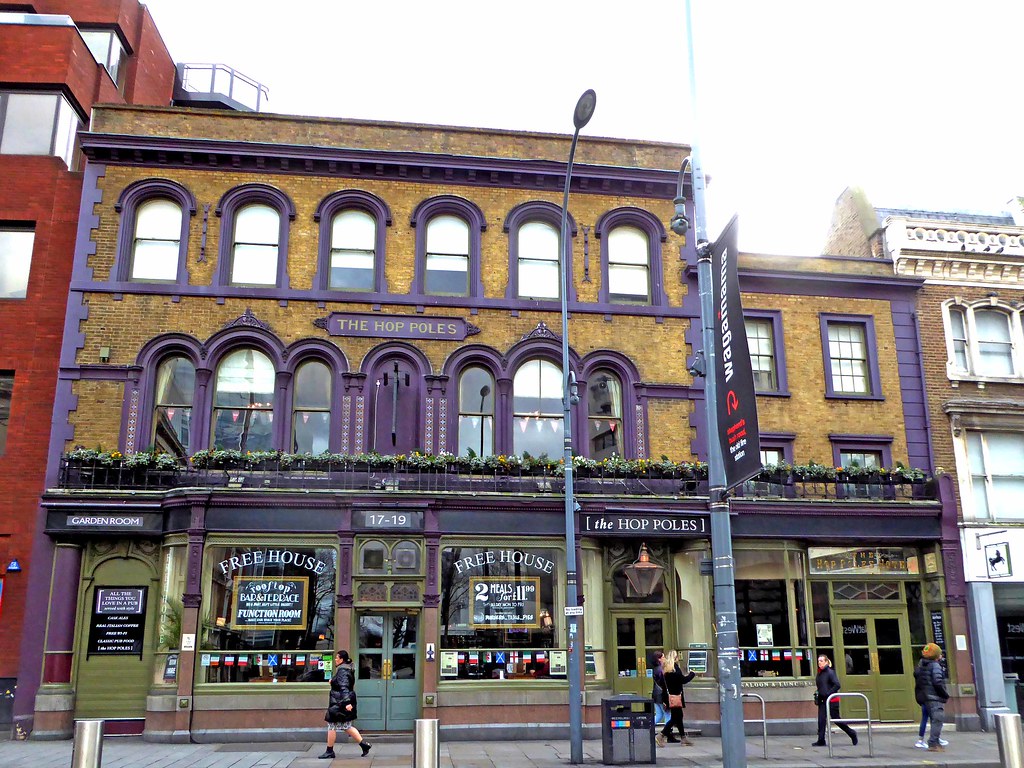 Hammersmith really do like their green pubs don’t they? It’s one of the nicer pubs in the area but it always seems shut even before 11pm when all the rest shut. It’s a  craft pub, but is more geared to food and spirits, rather than beer, the beer menu does changed a lot though and they even sell smoothies! It’s just a bit dull there. 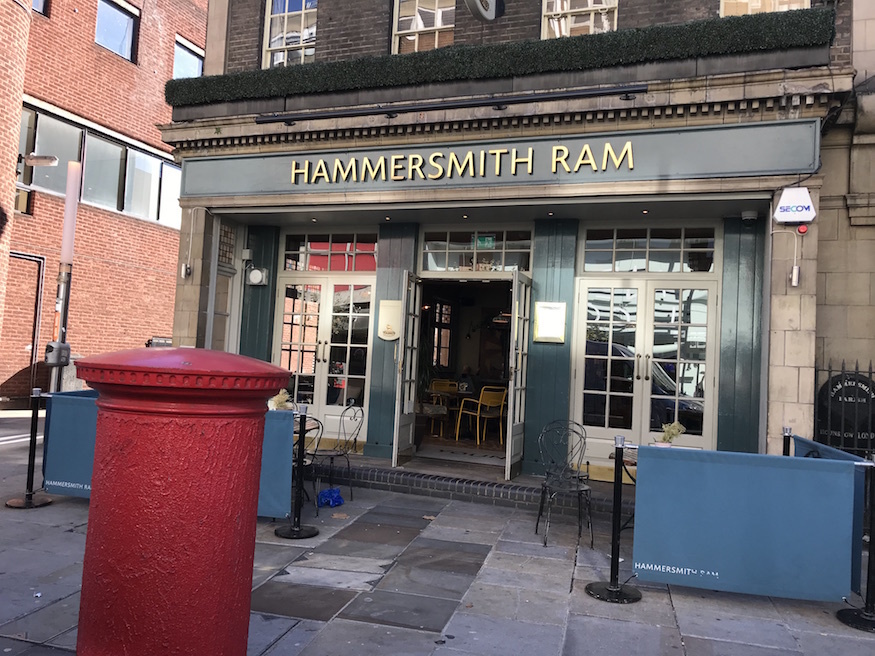 Again with the green pub exterior, but this time you have a postbox outside so I guess you can post a letter while you wait for your pint? It is the old man’s pub of the area but it is a Young’s Pub so with the exception of the Winter Warmer the drinks are nasty. 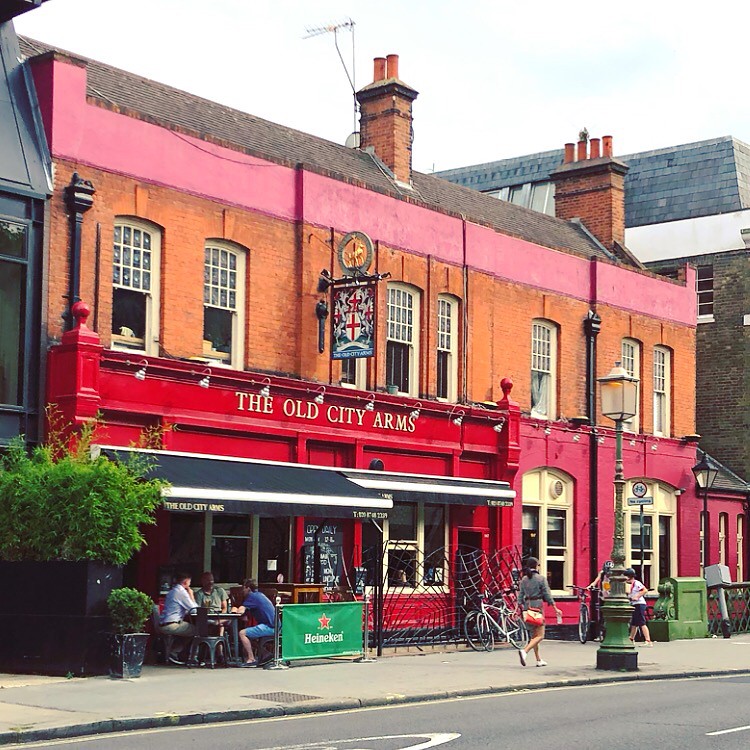 This pub is up on the approach to Hammersmith bridge and every time we walk past we  always think about going in, but it always looks empty so we haven’t bothered. If there are people they are always standing outside in the rain, hail, snow and sun, We dunno maybe it stinks inside? whatever the reason, we haven’t ventured to to find out.

A pretty small pub that has recently had renovations and been redecorated. We have been in there a number of times and have been very impressed with the selection of beers mostly bottles. Bob had a really nice Japanese Beer and Ash has had various Stouts & Porters. You will know this pub from movies like Bohemian Rhapsody or Sliding Doors. It isn’t much of a Saturday night pub, usually empty and shuts before 11pm.

Again we have been here a number of times but there really isn’t much of choice in Beers. The highlight of this pub is we got one of our more reserved friends to pinch her glass of wine due to the doors shutting before 10.50. It seems to be a Sunday roast pub, more geared towards families and comes to live in the summer with punters drinking outside while looking at the river and bridge. 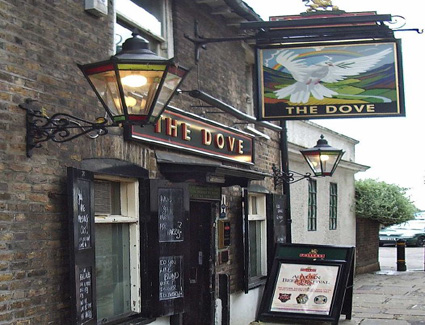 We have only been in these westerly pubs during last year’s Boat Race, so it wasn’t a ‘normal’ experience.  The Dove is a Fuller’s pub (the local brewery), so they have the full range there, from London Pride and ESB, to Discovery etc, just avoid the Chiswick because it tastes like dish soap.

The Duke of Cornwall

One of those TV/Sports bars with tons of TVs on showing only sports. Seemingly all the bars/pubs around here seem to be aiming at the football/soccer crowd and with Chelsea, Fulham and QPR nearby you can kind of understand that, but some of us are not massive fans and don’t want that in every pub. This is another lager based pub, and a limited supply at that. 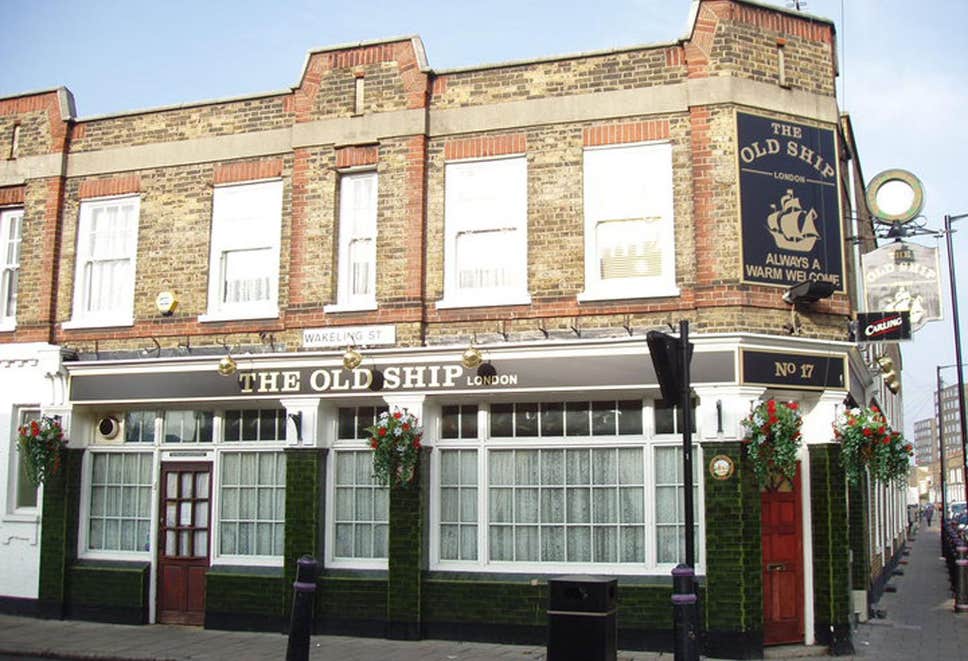 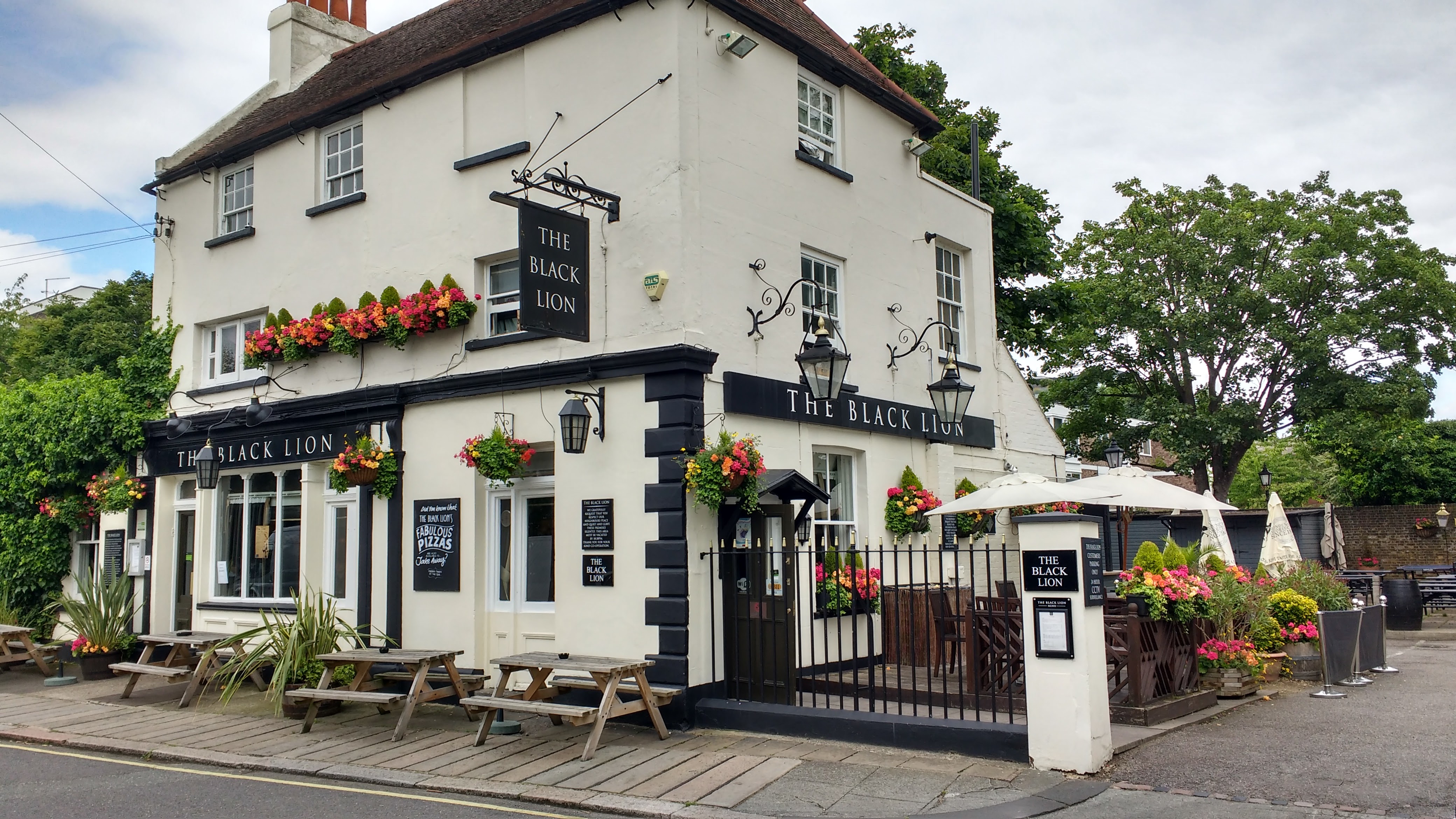 It has a really nice garden/outside area. However this was a Boat Race Day pub, it was jammed packed but we do really mean to go back as it does look good and the beer was nice. 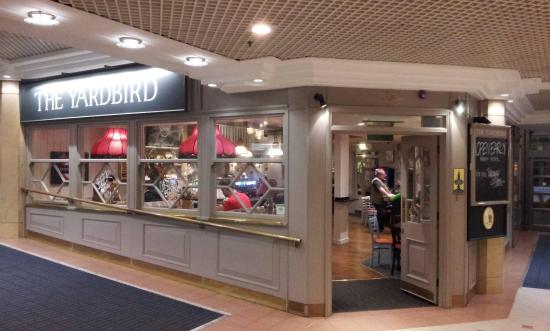 The Pub in the Broadway/Station was the Yardbird, it has closed down – thank goodness! – It is now going to be Craft Beer Pub. Which is good news because the Yardbird was both dead and incredibly dull, plus you know how much we love our Craft Beer Co. We look forward to seeing this one turn around and be busy and full of delicious beer.

So there you go, a new area and another run through of the pubs there. Do you drink in Hammersmith, did we miss out your local or a favourite, let us know in the comments and remember to check out our Social Media (links to the side). Subscribe for posts each week and we’ll see you again next week.

One thought on “Pubs In Hammersmith”